After testing with an RJL body composition analyzer, the results can provide suggestions for effective lifestyle changes to improve body composition by using food and fitness ideas. Body composition changes can be easily monitored over time with historical graphic and/or numeric reporting. 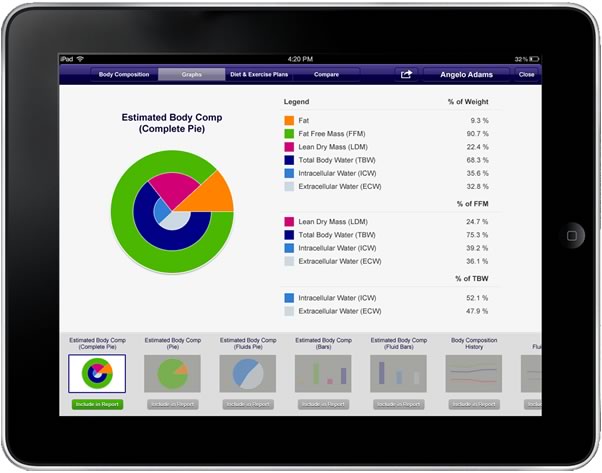 Bioelectrical impedance analysis is the study of the electrical properties of biological material and its change over time. This includes humans, animals, fish, plants, vegetables, fruits and anything living. Even human circulation and breathing can be quantified with a real-time BIA instrument that has enough sensitivity and a short sampling interval[1].

The most popular application for BIA is predicting human body composition as a total body measurement from hand to foot where resistance and reactance are evident from a biological circuit that conducts alternating current. The source electrodes introduce an alternating current (50 Khz) at the base of the toes and fingers. The detecting electrodes measure the voltage drop due to this circuit at the anatomical land marks of the ankle and wrist bones.

This is a four electrode, or tetrapolar measurement, which is optimal to eliminate electrode and field distribution problems associated with two electrode measurements. The conducting media has a resistive and capacitive electrical path. These two values are independently measured and resolve the cellular and ionic components of the material. The cellular volume is measured as capacitive reactance and the resistive volume as ionic resistance, both of which are expressed in ohms. Modelling these two values as their series or parallel equivalent circuits is important when comparing them to criterion methods.